LEAVING MICROSOFT TO CHANGE THE WORLD 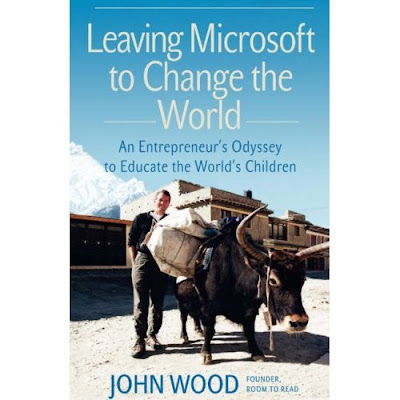 LEAVING MICROSOFT TO CHANGE THE WORLD "AN INFECTIOUSLY INSPIRING READ" John J. Wood is the founder and board co-chair of Room to Read, a global non-profit organization focused on literacy and gender equality in education in Asia and Africa that has reached over 6 million children.

He is also the author of Leaving Microsoft to Change the World: An Entrepreneur's Odyssey to Educate the World's Children and the children's book Zak the Yak with Books on His Back.

He is a member of the Clinton Global Initiative's Advisory Board and is a frequent lecturer at Harvard's Graduate School of Education and NYU's Stern School of Business.Wood took a vacation from his work at Microsoft in 1998 to trek through the Himalayas.

While trekking, he met a "resource director" for the schools in the Annapurna Circuit of Nepal, with whom he visited a primary school that contained 450 children and only a handful of books—none age-appropriate.

Upon seeing Wood's reaction to the lack of books, the school's headmaster suggested, "Perhaps, sir, you will someday come back with books," which inspired Wood to solicit book donations from family and friends via email sent from an Internet cafe in Kathmandu.

A year later, Wood returned to the school with 3,000 books—all donated in response to his email appeal to friends and family. Soon thereafter, he left his job at Microsoft entirely to devote himself full-time to Books for Nepal, a side project that would eventually form the foundation for Room to Read.

Leaving Microsoft was published by Harper Collins in August 2006. It was featured on The Oprah Winfrey Show in 2007, with "Oprah's Book Drive" for Room to Read raising over $3 million.

Leaving Microsoft has been published in 20 languages. It was named one of the Top Ten non-fiction books of 2006 by Hudson's Booksellers and a Top Ten business narrative by Amazon.com. The sequel will be published by Penguin in early 2013.
Posted by MERBOK TIMES at Thursday, March 21, 2013