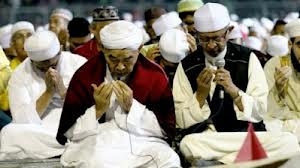 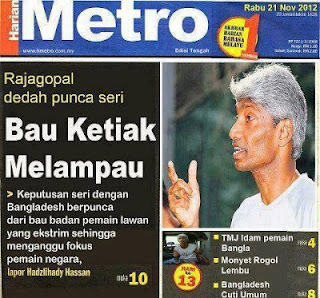 Selepas melepaskan jawatan dalam Kerajaan, Dr Mahathir seperti keseorangan dan ramai yang dulu mencium tangannya kini lari beralih giliran mengampu Pak Lah. Syed Mokhtar tidak begitu, kata Mahathir “ For a while, I thought Syed Mokhtar too had disappeared. But it was not so. He continued to seek me out even though I was no longer in a position of power”.

Apapun menurut Syed Mokhtar "Wealth has to circulate. When you make money you have to give it away".
Posted by MERBOK TIMES at Sunday, November 11, 2012 11 comments: 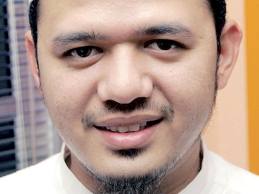 In an opening address by Singapore DPM Teo Chee Hean at the “Our Population, Our Future” Townhall Dialogue on 9 October 2012 Link, Singapore raising concern is her current low fertility rate and they need to import 20K-25K new citizens per year.
Back in 1970’s Lee Kuan Yew’s concerned is fearing that Singapore's growing population might be over crowding and will burden the developing economy. LKY started a vigorous ‘Stop at Two’ family planning campaign. They also legalized abortion and sterilization, women were urged to get sterilized after their second child. Women without an O-level degree, deemed low-income and lowly-educated, were offered by the government seven days' paid sick leave and $10,000 SGD in cash incentives to voluntarily undergo the procedure.

In addition to promoting just having two children, the government also encouraged individuals to delay having their second child and encourage late marriage.

The government also added a gradually increasing array of disincentives penalising parents for having more than two children between 1969 and 1972 by raising the per-child costs of each additional child.

Workers in the public sector would not receive maternity leave for their third child or any subsequent children. Hospitals were required to charge incrementally higher fees for each additional child. Income tax deductions would only be given for the first two children.

Large families were penalised in housing assignments. Third or fourth children were given lower priorities in education; Top priority in top-tier primary schools would be given only to children whose parents had been sterilized before the age of forty.

Today Singaporean is concern will they be like a stranger in Singapore in near future when there are so many foreigners around.
Posted by MERBOK TIMES at Sunday, November 04, 2012 No comments: 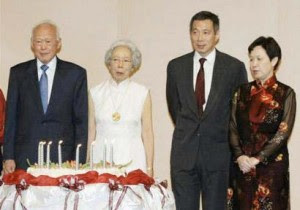 The Star 3/11/2012 - By : Siah Chiang Nee
Lee Hsien Loong may have been groomed by his father Lee Kuan Yew to be the prime minister but nothing could have prepared him for the Singapore of today.

IF Lee Hsien Loong had indeed been groomed for political leadership from childhood as popularly believed, nothing could have prepared him for the Singapore that he leads today.

In particular the change in values wrought by the Internet. Underage prostitution, online pimping, teacher-student affairs, schoolgirls film–ing themselves in the nude, etc are on the rise!

As Prime Minister, he has been finding out about the web’s political — and now increasingly social im­pacts on society — which is not always to his liking.

The good is often not mentioned by a people maturing faster. In recent weeks, this once conservative city has been discovering just how a large portion of its well-educated people have changed since the era of Lee Kuan Yew where the ban on long-hair and Playboy magazine was enforced.

Lately two Malaysian students, Alvin Tan and Vivien Lee filmed them­selves having sex and posted the videos for public viewing. In open forums they expressed “no regrets” but advised people to be open about sex.

Tan, a bright law student, was a Malaysian permanent resident and an Asean scholar at National University of Singapore (NUS).

Although the couple does not reflect the average youths in either Singapore or Malaysia, their explicit, close-up shots of their crude sex acts shocked even the most liberal-minded.

One posting was laden with expletives that have become all too familiar online these days. The Malaysian-born Australian was fired a day later as NTUC assistant director in the membership department despite her public apology.

It drew criticism from ministers, including Prime Minister Lee Hsien Loong, who called on Netizens to show respect to each other.

It shows how people’s values of sex and race are under pressure as Singapore goes through a period of intense transformation and social frictions, locals against locals and foreigners against Singaporeans.

The Internet is not, of course, the sole troublemaker but the anonymity that it provides most writers has allowed them to spread hate messages without the fear of exposure.

The Alvin Tan-Vivien Lee episode has not raised much peer support for the couple. Lee’s appeal to Asians not to remain too conservative, but be open about their sex life evoked more condemnation than praise.

“There is nothing wrong talking about or having sex. It is a normal thing between two consenting adults. There should not be any stigma when a couple wants to talk or be frank about this,” she said.

Most believe that public fornication is not the way to go. A polytechnic student said: “There are certain things that should remain private.”

Others have shown hostility tow­ards their action. “This is what happens if you send your children to higher education institutions but forget to teach them morality,” one surfer wrote.

This open sexuality among a section of youths and the increased spe­w­ing of race and religious hatred are happening at a time when the aut­horities are considering drafting a “code of practice for Internet services”.

Saying there was virtue in the idea, the Minister for Information, Communications and the Arts Dr Yaacob Ibrahim said the industry needed to regulate itself to ensure higher credibility and quality.

“I believe the government is more concerned about the impact on politics and elections than the rise in social friction or public sexuality,” said an opposition volunteer.

However, he does not believe the authorities are planning overly strong measures to control or prosecute web offenders.

The Internet remains a borderless world that is not easy to track web offenders, particularly among un-sym­pathetic service providers outside Singapore, he said.

In many ways, the world around the prime minister has changed dramatically since his school days and it is making his job somewhat more complex compared to Lee Senior’s.

So can the controversial code of Internet practice find public acceptance and take off, or will it be caught in a cyber web of ill-effective regulations?

Much will depend on the details and government intent. One point that is under discussion requires operators of web blogs to be registered, while another would seek to forbid anonymity.

For one thing, any idea of Internet control will not find ready support among Singaporeans and take the country backwards.

Several months ago, a study by independent Blackbox Research found that 48% of Singaporeans felt that news websites critical of the government should be allowed to continue operating.

However, a third felt these alternate sites should be properly regulated alongside other news providers – while one per cent felt they should be banned.

Some 72% felt that people should be able to post material anonymously.

Ever since I can remember, during my reporting days, I had been hea­ring about former prime minister Lee Kuan Yew grooming his son for political office.

As a student, Hsien Loong learned the Russian language in anticipation of the Soviet Union emerging as a global economic (and political) po­­wer.

That would have benefited any Asian leader who could speak the language, it was thought.

It didn’t happen that way, of course, which shows that history can put paid to man’s best-laid plans.

Instead of winning the Cold War and continuing to lead half of Europe, the Soviet Union disintegrated.
Posted by MERBOK TIMES at Saturday, November 03, 2012 No comments: