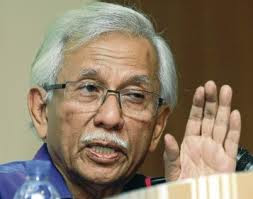 The Chinese should put aside their sentiment to punish Barisan Nasional in the general election and vote rationally, said former Finance Minister Tun Daim Zainuddin. In an interview with China Press, Daim said he believed that the Chinese would make the right choice by voting Barisan.

“If you want to punish Barisan, what will you get in return? If the Chinese are not satisfied with the Government, let's see from another perspective. Are they dissatisfied with every issue?

“Economic stability, a peaceful, harmonious, developed and progressing country. It is impossible to get everything you want. I also tell that to the Malays,” he said.

Daim pointed out that if everyone was satisfied with certain issues while dissatisfied with others, it only showed that the Government had done the right thing because it could not exist just for a certain group of people.

In contrast, he said the three parties in Pakatan Rakyat had their own agenda, adding that they could not even properly manage the state governments, let alone the Federal Government.

Based on his analysis, Daim said Barisan would be able to form the next Government, with an even better overall performance compared with the 2008 general election.

“Barisan may lose some of its seats in Johor, Sabah and Sarawak. But the overall results will be better than that in the last elections. This is because Barisan will be able to win back some of the seats in Selangor, Kedah and Kelantan,” he said.

Barisan, said Daim, also had a chance to wrest back Selangor and Kedah if the coalition could come up with suitable Menteri Besar candidates. However, he admitted that it would be an uphill task for Barisan to get back Penang and Kelantan.

“As long as Kelantan Mentri Besar Datuk Nik Abdul Aziz Nik Mat is there, the people will vote for PAS. It is very difficult for Barisan to win the state,” he said. Daim also said that in Perak, although there would be a stiff fight, Barisan had the upper hand. (The Star)
Posted by MERBOK TIMES at Sunday, March 31, 2013 No comments: