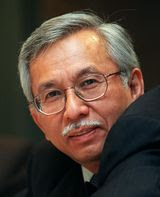 He sees the government's move to make public the PKFZ audit report as a "good thing" as there is little need to cover up.

But he said what is more important is follow-up action i.e. punish the wrongdoers.

Daim said said this in an interview with China Press which was published today.

"It is a good project but because of the lack of proper overseeing it has resulted in the current state of affairs. The government cannot leave the issue hanging, it cannot allow them (those responsible) to do as they please."

"The government must punish all those lawbreakers, only then can it regain the public's confidence."

Daim said the government made history by announcing the PKFZ audit report but felt that what is more important is the follow-up action, including punishing the wrongdoers to make them shoulder their legal responsibilities.

"In the past, the public did not see those who abused their power getting punished, resulting in more abuses of power. As such, it (making the PKFZ audit report public) is a good start."

He said no matter how, the public want the wrongdoers punished.

He believed that since the government has taken the first step to address the fiasco, it would follow through to its conclusion.

Daim, an Umno veteran, also touched on a number of subjects in the interview:

Changes in Barisan Nasional
Daim said although BN is changing, the changes taking place are too slow to meet the people's expectations.

"Changes in BN are moving at a slow pace. People hope to see faster and bigger changes."

He said it has been more than a year since the March 8, 2008 general election and more than 100 days since Datuk Seri Najib Abdul Razak became the prime minister, and although the economic situation has improved, a lot more needs to be done.

He believed the people has not lost confidence in BN completely but BN must reform and do it immediately.

"The people want to see changes, be it BN or Pakatan Rakyat (PR), whoever becomes the first to succeed in carrying out reforms will win their support.

"You (BN) have to understand the people's needs. Take care of their needs and understand their worries and expectations, these are important considerations (for reforms)."

"This is because the government does not nurture the right talent for the market needs. Universities do not provide courses to match industry requirements and many graduates are jobless as what they learnt does not meet the needs of the job market."

He said these jobless graduates, who are mainly Malays, take up politics, and they join PAS because they are angry with the government for being unemployed.

"The government should listen to the worries and expectations of youth to win their support."

He said not only are the youth against the government, some one million of the three million Umno members do not vote the party.

He said BN cannot depend on Umno to win the general election when the latter only has the support of two-thirds of its members.

Daim said the Umno leadership must instil confidence in members, many of whom have lost confidence in both themselves and in the party.

"BN needs to win the support of the people. If Umno is united, strong and listen to the people, the people will still support the party."

On Umno amending its constitution to put an end to money politics, Daim believed that it would help the party win back the people's support.

"Money politics and corruption are the biggest problems facing the party. Once these problems are resolved, other problems will not be much of a problem."

PR not better than BN
Daim said the public generally hold high hopes in PR but sad enough, the PR-led state governments continue to play the roles of the Opposition.

"Don't waste time levelling accusations at the BN, you (PR) are the governing coalition (in these states), you should focus on how to fulfil your election promises," he said.

He said the people are beginning to see that even given the chance, the PR cannot do any better than the BN. This is the public's greatest disappointment, he said.

MCA split affects BN's reforms
Daim believed that a split in MCA will affect efforts for closer cooperation and reforms in BN.
"As such Umno should unite and strengthen itself even more so that other BN component parties will listen to its opinions and advice.

Any party which is split, be it MCA, Gerakan or even DAP, will not be united, and the people do not respect a disunited party.

Teoh Beng Hock incident
Daim felt that no matter what the cause of the political aide Teoh Beng Hock's death was, the undeniable truth is that a life was lost. As such, the government needs to to take a serious view of the case, he said.

"I life is lost, the family members are definitely very said. The government should look at the problem seriously to avoid a repeat of the tragedy."

"If Umno and BN want to change, you cannot find a better combination than the Najib-Muhyiddin team."
Posted by MERBOK TIMES at Wednesday, September 16, 2009 5 comments: