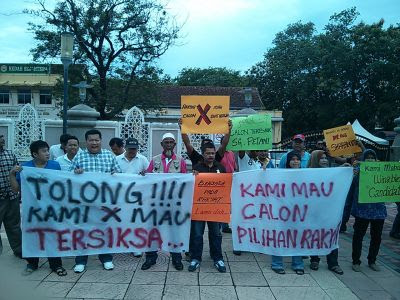 SUNGAI PETANI: A group of people here demonstrated Wednesday against Barisan Nasional's Sungai Petani candidate Dr Shamsul Anuar Ismail, calling for him to be replaced for the May 5 polls.

Gathering near the Sungai Petani clock tower at 10:45am, they said Dr Shamsul was not known to the locals, adding this would affect voting patterns here. "We don't want a new face, we want Mrs Shahanim!" they shouted, referring to Puteri Umno deputy chief Shahanim Mohd Yusof.

Leading the protest was Shahanim supporter Sohadah Yusof, who warned that Barisan would lose Sungai Petani if Dr Shamsul was fielded.

"Nobody knows who Dr Shamsul is.

"The people here really like Shahanim, so why do you want to bring in someone else?" she asked.

Sohadah, who is also Sungai Petani Single Mothers and Orphans Association chairman, added that Shahanim was deeply popular amongst the town's women.

She said it was not too late for Barisan chief Datuk Seri Najib Tun Razak to consider Shahanim as Sungai Petani MP candidate.

"If not, I'm sure Barisan will lose votes here," she said. On Tuesday, Barisan Kedah announced Dr Shamsul among the 18 parliamentary candidates for the state in the general election.
Posted by MERBOK TIMES at Thursday, April 18, 2013 4 comments: