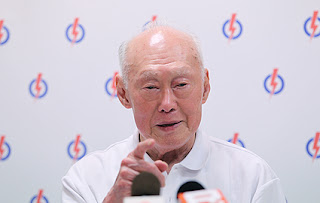 With the opposition gaining seats in the general election, Lee Kuan Yew complains about the ungratefulness of youth.

ST : MINISTER Mentor Lee Kuan Yew gave his first – albeit indirect – assessment of the 2011 general election result on Sunday, remarking at a community event in Tanglin Halt that the younger generation ‘does not remember from whence we came’.

‘That is to be expected,’ he said. ‘But I do and those amongst you who are older than 50 will remember.’

‘And do not believe that the Singapore flight can be on auto-pilot. We will run into a storm, we will run into all kinds of emergencies and we must have good pilots on board,’ he added.

Asked by reporters later about the drop in the PAP’s vote share from 66.6 per cent in 2006 to 60.1 per cent in this year’s general election, he said: ‘I’ve also noticed that and I’m sure the Prime Minister and his team will sit down carefully and analyse the reasons and adapt our policies. I can’t say more. I’m not the Prime Minister.’
(Source : Lee Kuan Yew Watch)
Posted by MERBOK TIMES at Monday, May 09, 2011 1 comment: