An open letter to TS Francis Yeoh of YTL (reproduced from The Malay Mail): 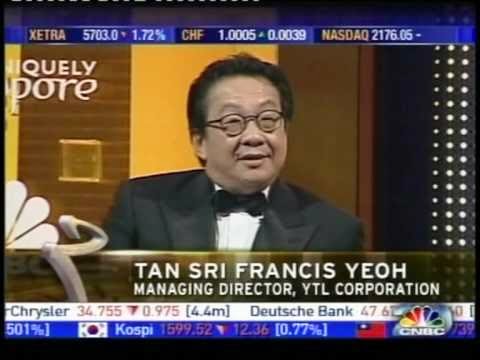 Dear Editor,
I read in awe the comments made by Tan Sri Francis Yeoh (FY) reported in your Malay Mail Online Portal on Tuesday, 3rd June, 2014, and several other newspaper including The Malaysian Reserve and The Edgedaily, quoting him at Pemandu’s global Malaysia Series Forum at the Securities Commission.

Francis Yeoh is probably the last person qualified to comment on cronyism, racial and religious rhetorics. For someone whose family is one of the biggest beneficiary of crony capitalism, political corruption and high handed business tactics. Francis Yeoh should just keep his fake views to himself and continue planning his transfer of wealth overseas.

All you have to do is read the Memoirs of Tan Sri Ani Arope to know first hand of how high handed Francis Yeoh bulldozed his way through his IPP which has cost the Malaysian citizens billions of Ringgit. It’s the same billions which Francis Yeoh has now transferred abroad acquiring assets in UK, Australia and Singapore, all from the grossly inflated electricity tariff YTL got in 1994 on the back of power crisis in 1992.

Francis Yeoh called the IPP as “innovation”. I and most Malaysian citizens would call it daylight robbery.
The innovation was to produce electricity at 23 sen, sell it at 30 sen, when TNB was producing it at 8 sen and selling it at 17 sen.
Innovation was land-grabbing the Paka and Pasir Gudang sites from TNB and building his IPP. Innovation was arm- twisting Petronas to sell gas at huge subsidy. Innovation was forcing through a “take or pay” mechanism in the Off-take Agreement .

Innovation was bulldozing through the IPP via EPU through whatever means to get the sweetheart deal. Innovation was forcing Dato Sri Ani Arope, the TNB CEO then to resign for refusing to accept YTL terms.

Francis Yeoh is probably the only Chinese who dared walk through like a King into an UMNO General Assembly those days to see the Prime Minister and nobody dared questioned him or stopped him.

Let’s move on to the Express Rail Link which is also another innovation by FY which he touted as a runaway success without government help.

Oh, he forgot to mention and most people didn’t know that RM 5 of every passenger airport tax paid by travellers going through KLIA is paid to ERL even though less than 5% of them uses the ERL to get to KLIA.

And not to forget that the government paid RM 100m for the recent extension of ERL to KLIA2 and the passengers now to pay an extra RM2 to get to KLIA2 to cover the cost of the extra trip to KLIA2.

Perhaps we should give FY the “Malaysian Innovator of the Century” for all the “innovation” he had done that ripped off billions of Ringgit of taxpayers money including mine.

Now lets move to the topic of racism.

Can FY come clean on how many Malays and Indian YTL Group has employed? I would like to see it broken down by category of senior management, management and kulis. It’s the same FY who employed a token Malay as Executive Director in his Group who doesn’t have to actually go to work, so he won’t learn their trade secrets.

On corporate governance, YTL has the infamous Kitchen Board comprising of family members only that meets and decide on key things . The formal Boards of his listed companies only meet to rubber stamp decisions and tick their attendances for publishing in the annual report.

Francis Yeoh participated in a recent forum of Top 50 PLCs chaired by the Prime Minister at the Security Commission recently.

At the session, a study on graduate employment by 2 lecturers (Dr Lee Hwok Aun and Dr Muhammad Abdul Khalid) in University Malaya was tabled, which highlighted how Malay graduates are discriminated against in job application.

It was Francis Yeoh his most eloquent, when he was asked to give his views. He managed to say about 5 words and “innovated” his way out by changing topics. Francis Yeoh’s latest innovation is now team up with royalties for business.

This is after years of currying favors from politicians until his true self showed up and no politician wanted to have anything to do with him.

After he bad-mouthed Tun Dr Mahathir to just about everybody who cared to listen, the same Tun Dr Mahathir who made him a billionaire many times over. After years of loathing the royalties, now they are his favorite people.

But things didn’t go according to plan. After losing out in the Project 3B IPP tender, FY managed to “innovate” his way through bypassing the open tender method to win Project 4A just days ago.

Another brilliant innovation by FY, is to metamorphorse YTL from a mere Chinaman contractor turned power producer to also now be a brilliant telecommunications company. How much did you pay for the 4G license Francis Yeoh?

And also the highly inflated Bestranet project to wire up all the schools in the country, so that you can plant your base stations paid for by the people! Another brilliant innovation by YTL should be your company tagline, no need to hire a bumiputera PR company to come up with a tagline for you.

And what about KTM land in Sentul FY? I suppose taking land from a bleeding KTM at rock bottom price makes you a national savior?

After benefitting from all these sweetheart deals, you later called for “brutal competition” as the only way for the country to progress.

When you get all these deals. Its innovation and entrepreneurship. When a bumiputera like Tan Sri Syed Mokhtar gets them, its cronyism and unfair privileges for the bumiputeras.

You criticized the affirmative action plan which is national policy giving unfair advantage to the bumiputera, but I can assure you that all the small contracts handed out to the small contractors the last 21 years since you got your innovative IPP does not even come close to the contracts and businesses YTL has got from the government and the people.

I can go on and on, and I am sure there are many more people who knows more than me who can add to it. Not enough in attacking and insulting our intelligence, FY is also now attacking bumiputeras, saying the non-bumis now have no chance in business in Malaysia.

My message to Francis Yeoh is maybe it’s time for you to sell out the remaining 15% of business which are still in Malaysia and start packing your bags to move to UK. A lordship awaits you in the land of the fair.