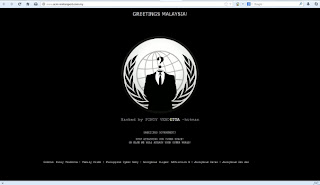 
A series of websites defacement has been conducted between Philippines and Malaysia over the dispute in the land of Sabah. Hackers claiming to be part of Anonymous group from Malaysian and Filipino and attacking websites of each other.

It was believed that the first online attacks were made by Malaysians and defaced the government-owned site of the municipality Moal Boal, Cebu, hours after a skirmish erupted between police and Sulu gunmen on Friday.

Meanwhile the online shop of Philippine mobile services provider Globe Telecom was defaced by hackers claiming to be from the "MALAYSIA Cyb3r 4rmy".

On other side Philippine Cyber Army hackers claiming to have attacked 175 Malaysia-based sites,“Greetings Malaysia! Greetings Government! Stop attacking over our cyberspace or else we will attack your cyber world!” the Philippine hackers.

Today story take another angle, when Several websites of Philippine local governments have been hacked by the so called “Anonymous Malaysia” 3rd group of hackers with the message: “Well, its time for us to PEACE and stop attacking each other.

To end up this way, this is our last defacement and from now on none of us will step or touch ur (sic) country site and none of you are able to touch our country site. If u against (sic) this agreement, we wont accept any apology or excuses #wewillnotgodown.”

A statement by hacktivist group Anonymous on pastebin also called for hackers of both countries to stop. "The petty cyber-war will gain us nothing but wrong impressions from ordinary people. Our goal is to peacefully unite the collective consciousness of humanity.

We urge our brothers from both countries to sit and talk Not blabber out words then fight like kids. We have no place for petty arguments and to surrender to provocative actions that we know we can answer with a larger and bolder approach."

As far now, Individual hackers from both parties are appeared to have started the attacks on each other.
Posted by MERBOK TIMES at Sunday, March 10, 2013