Asas Serba ~nothing to do with Daim Zainudin?

(The Star ~Tuesday May 4, 2010)
Asas Serba: No single individual will control highways
By JAGDEV SINGH SIDHU

PETALING JAYA: Asas Serba Sdn Bhd, which is proposing to take over 23 tolled roads and highways in the country, said no single individual would control the highways as institutional shareholders and bondholders would dictate how the company is run.

The company, which has yet to receive an answer from the Government on its proposal, said its bold takeover plan was workable and it did not need a government guarantee to make the offer bankable. 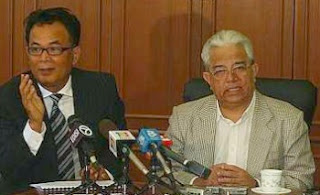 At a media briefing yesterday, Asas Serba said it planned to issue bonds with a dividend component to pay for the estimated RM50bil it would cost to complete the transaction.

The bonds, which will be issued by the new concession company set up by Asas Serba and other new shareholders, would carry an annual coupon rate of 7% plus a share of profits that is equivalent to a 2.5% to 5% effective yield.

The bonds with the dividend sweetener will be issued with tenures to be fixed based on the projected cashflow statements of the toll-road companies.

Asas Serba said the share of profits would give bondholders the benefit of sharing the upside of the returns to the new concession company.

Asas Serba’s offer entails road users getting a 20% discount on the toll rate as of January 2008 – 10% based on today’s toll rates PLUS charges after inputting the compensation from the Government. And while it would need to work out new concession agreements with the Government, it is not seeking an extension of the concession period of the current agreements.

The company believes that its plan would work as it centres on making the operations of the highways more efficient by reducing costs. The company feels it can cut costs by 15% in a short time and implement programmes to raise non-toll revenue.

The company’s financial model uses a traffic growth volume of 3% to 4% a year, which it said was less than the current 5% per year experienced by the main toll-road operators.

It said any future expansion of the highways, should it take over the concessions, would have to be negotiated separately with the Government.

Ibrahim said the company had met a few interested parties that were interested in selling their highways
Posted by MERBOK TIMES at Tuesday, May 04, 2010