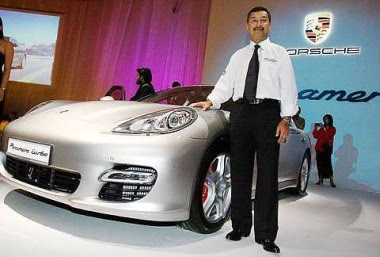 “Reception has been very good. We have existing (Porsche) owners and potential buyers all curious to see what a four-door Porsche sedan looks like,” he told StarBiz after launching the Porsche Panamera S, 4S and Turbo models on Saturday.

“So far, six units have been pre-sold and 16 units booked by potential customers who want to see the cars first. Hopefully, this will translate into sales also,” he added.

He said other countries in the region had started unveiling the Panamera since its introduction at the Shanghai Auto Show in April.

On whether it was a good time to launch, in view of the current economic downturn, Mokhzani said: “There is never a perfect time but people are getting more confident about the economy. The stock market is moving so hopefully, it will get better.”

According to Mokhzani, Jaseri expects to sell over 100 Porsche cars this year. It sold over 120 units last year, with the Porsche Cayenne and Cayman models being its best sellers.

“This year, we are expecting a slowdown in view of the economy. But hopefully the launch of the Panamera will help boost sales for us,” he said.

In an effort to reduce carbon dioxide emissions and boost fuel economy, the Panamera models come with a fuel-saving stop/start measure, whereby the engine is automatically switched off when the car comes to a standstill, such as at traffic lights and in traffic jams.

All the driver needs to do is to keep his foot on the brake. The engine automatically restarts when the driver takes his foot off the pedal.

The basic price starts from RM998,000, RM1.1mil and RM1.4mil for the Panamera S, 4S and Turbo variants respectively. All cars are built at Porsche’s plant in Leipzig, Germany.

Mokhzani hinted that Jaseri may bring in the Panamera Hybrid and GT3 RS models after their launch by the German principal next year.
Posted by MERBOK TIMES at Wednesday, October 07, 2009